So I had a pretty decent sleep the night before flying to Seoul…which was exactly the night I DIDN’T WANT TO SLEEP IN!!! Of all the nights my shit roommates could have chosen to deliver me a blissful slumber they choose the night of my flight. I don’t have a working phone and so no alarm and I was banking on their snores and early morning rumblings. Thankfully I got up in time to rush around, say goodbye to the lovely hosts, and bail for the subway. The airport in Fukuoka is extremely accessible and was only 3 stops away from my subway station.

It was in the airport I witnessed the first and only major mistake made by the Japanese and it was coincidentally on a day where I couldn’t be late…Inside the international airport you have to go to the  3rd floor to check in, and they do check in baggage scans before you can walk to the counter…but they hadn’t set any of that up yet and so I glide up the escalator to see hundreds and hundreds of lined up Japanese people waiting for the all clear. You have got to be kidding me. This went on for the better part of an hour as we watched the airline ladies set up the procedure before sending us on our way. It was nothing short of lucky that I made my flight on time, and in the chaos I had forgotten to have a coffee.

The headaches started as we took off and only worsened from there on. It was upon landing and realising that I had no money to buy a coffee that I had to get to an ATM…uh oh…the ATM wouldn’t accept my card no matter what I did. No good, pas bon, nicht gut, shit. I found a different ATM to a different bank and tried again, no good. I was now in full panic mode.

How could I be so stupid that I didn’t get Yen out at a 7/11 and exchange it upon landing? Moron. I came across the Woori Bank ATM and this was my final hope, else…I don’t know what I would have had to do. Accepted my card? Check. Actually processed my funds? Check. Heart palpitations abated? Check. I had Korean Won in my hand and off I went to Starbucks (don’t judge me).

I decided to take the luxurious method of travel into my hostel in the Itaewon district in Seoul as my head was killing me and I just didn’t have the patience to lug my bags onto a subway. The airport limousine bus is basically spacious bus version of the Japanese Shinkansen. You can stretch out, sleep, and each seat is isolated so you don’t have to share with anyone else. The price? 12,000 won which is about $13 Australian and for a 50+ minute trip I am completely alright with that. Add on the fact the driver dropped me 20 metres from my guest house door step and I call that a win.

Seoul is like a playful mix of Tokyo and Bangkok – It’s not as pretty as Tokyo, and resembles Bangkok in the sheer hustle and bustle and immensity of it all. There are way more cars on the road and the driving definitely reminds me of SE Asia in that they’re all nuts. I heard horns for the first time in a month (I barely ever heard one in Japan), and the drivers aren’t afraid to get angry at shitty driving – which feels like home to me because the only thing more Aussie than screaming at bad drivers is Vegemite. It reminds me of Tokyo in how it seamlessly weaves the old and the new together and tries its hardest to be a modern gem without letting go of the past. 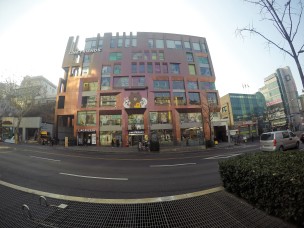 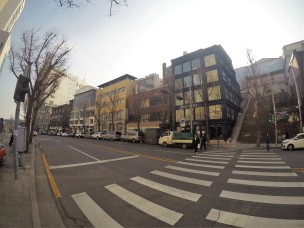 The hostel is lovely for it’s incredibly cheap price. The whole thing is homely and the people are very warm. I managed to pick up a universal adaptor for $2 Australian from the guy…and as of yet have no paid it. A part of me hopes he forgets and I get it for free, yes I’m that cheap when travelling. After a quick unpack I decided to head out into the world and see the area around my hostel. The real reason was I badly needed another coffee to quell these head aches. Not 15 metres from my hostel I discovered a boutique coffee shop called Anthracite with the coolest layout I had ever seen. It has such a wide variety of different blends and brews that I had to compliment them. Itaewon is a beautiful suburb, which I would later learn is now the foreigner capital of Seoul. There is a coffee shop on every corner and then a few in between that. Seriously I think this place rivals Vietnam for coffee shop per square metre. The other thing this place has in abundance is Turkish restaurants…I have no idea, but I’m kind of interested in digging into a kebab.

The wandering came to an abrupt halt when I discovered a Canadian bar called the Rocky Mountain Tavern. That was enough to lure me inside and I wasn’t disappointed.

Greeted by a friendly Ukrainian girl who was one of 8 staff members from around the globe, I ordered the first of many $4 pints of beer (you read that correctly) and ordered myself some wings. Each wing came to about 40 cents Australian, so over the course of the ….8 hours I was in this bar I had myself around 30-40 and the total came to $15 AUD…which to anyone that has ever ordered food in Australia will know that is a total joke. 40 wings at a restaurant would easily be triple that.

I met several amazing people over my time there. The first was Scott who was an american. He had lived in Korea for 9 years total, ex army, now engineer for a fortune 100 company in Korea and we got along great. His friend was the Canadian who owned the bar so that was a lucky break for me, we were treated like kings. I met his Korean girlfriend who was truly lovely and they both gave me the breakdown of Korean culture and social interactions. Scott was a firm believer that my experience of indifference, rudeness and general ignorance at the hands of most Japanese people was actually pretty common. I was warned that my time in Korea might be similar, as the Koreans do share that with the Japanese, so that was disappointing. Nevertheless, we had a great time, and then the Australians came in. The accents were obvious from the get go and I knew they were working class men from the bush. Luke (29), Bill (50) and Tim (60) (most typical Aussie names ever) and I was spot on with my guess, the two older gents (around their 50s) were from Mt Isa where I grew up so we got along famously, especially when they found out I’d worked in that line of work a few times myself. They were staying in Seoul for one night to get a visa to go to Mongolia where they were “Digging a big hole”. They were great company until they started harassing the waitstaff every chance they got – if you’ve never been around Australian men on the drink (hard to imagine because Australians tend to always be drinking), and in particular those not from the city, it’s a difficult interaction to describe. Overly loud and aggressive, opinionated on subjects they know nothing about, and tough guy mentalities and it is never relaxing. So kinda like dealing with the stereotypical loud mouth Americans except these guys have no qualms throwing punches. So it went from lovely and lively, to lively and the waitstaff weren’t interested in being near the bar. It was when Scott and his girlfriend left that I started getting annoyed and around midnight I called it quits.

So I haven’t experienced much just yet, but this city has a great feel to it and I’m truly excited to see what my week here brings about!

8 thoughts on “This place has Seoul”